Al-Qaeda occupies the Legislative Yuan and other absurdities 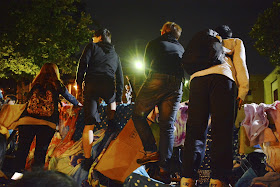 Forget conspiracies and terror training camps. The students are simply more clever than the government officials in the Ma administration

After a week during which pro-government media used every possible false analogy to discredit the Sunflower Movement — calling them “violent,” likening them to Nazis — it seemed that we had reached the outer edges of absurdity. But then, when the movement slipped past security and occupied the Executive Yuan on Sunday, people within the ruling party felt they had to come up with something new.

Legislator Chiang Hui-chen (江惠貞) was certainly happy to oblige, and on Monday she compared the student leaders to al-Qaeda, the international terrorist organization responsible for, among other things, the 1998 embassy bombings in Kenya and Tanzania, the 2000 attack on the USS Cole off Yemen, 9/11, the 2004 Madrid Bombings and the 2005 London attacks.

According to Chiang, who evidently commands a vast body of knowledge about terrorism, the Sunflower Movement was “too well organized” and “too well trained” to be a simple student movement. Implicit in his remarks was the view that (a) university students are too dumb to pull off such a stunt and (b) some obscure force must have orchestrated the whole thing — the Democratic Progressive Party (DPP), former chairperson Tsai Ing-wen (蔡英文), or perhaps outside elements.

The reality, however, is a lot less complicated. Issuing from the nation’s top universities, the leaders of the Movement are, for the most part, a lot more intelligent, and certainly more tech-savvy, than your ordinary civil servant. It is therefore well within their capability to organize such a campaign. As to their training, secret camps deeps in the mountains were not necessary; the leaders have been at it for the past 24 months, and their training ground was to be found in the streets of Taipei, in Miaoli, and elsewhere around the nation where government policy broke democratic rules of the game. Some of them were part of the Wild Strawberries; others go back a few more years, with involvement in the Wild Lily student movement.

But the Ma Ying-jeou (馬英九) administration, on the defensive and with public opinion turning against it, had to lash out and strike fear in the hearts of the constituents. This has been the tactic from the beginning of the crisis, and several media outlets were happy to help out. (Ironically, the government has been mum about two incidents outside the Legislative Yuan involving gang members, armed with knives and improvised explosives, be associated with the pro-unification Chang An-le.)

Perhaps the allusions to Osama bin Laden’s evildoers and to a party that was responsible for millions of deaths in Europe in the 1930s and 1940s went a little too far. Surely, a far more reasonable Premier Jiang Yi-huah (江宜樺), a man who when a professor at NTU taught Hannah Arendt,* knew to stay well clear of such hyperbole. Yet Jiang didn’t completely skip the conspiracy theories either, and has hinted at a possible coordinating role by the DPP. Coincidentally, news reports were indicating that some of the protest leaders had at one point interned at Tsai’s think tank, the Thinking Taiwan Foundation, claims that her office did not deny.

But here again, people looking for secret societies and intricate political plots will be disappointed. As the Foundation said in its response, the student leaders were fully capable of independent thought and initiative. They didn’t need the support or promptings of politicians to agitate against bad government policy. In fact, most of the main leaders of the Movement have been protesting for the past 24 months over a variety of issues, from media monopolization to forced evictions. (This reminds me of the KMT claim in September 2011 that the Liberty Times Group and the DPP had ordered me to write an op-ed for the Wall Street Journal pointing out lax counterintelligence measures by the administration, as if I could not have reached such conclusions on my own. My employment with the green Taipei Times continues to haunt me, with critics of my recent articles in The Diplomat about the Movement arguing that my positive depiction of the activists stems from my past affiliation with the Times, a newspaper from which I resigned in anger.)

Moreover, those among us who have followed the activists known that they have been adamant since the beginning that they did not want to be the tools of any political party and have taken measures to ensure a safe distance between them.

So yes, some of the student leaders have had “contact” with Tsai’s Foundation, but the reason they did so isn’t because she is forming her own private army. Instead, it is because she understands to role and importance of civil society, one of the crucial components of a healthy democracy, and knows that the future leaders of this country are among them. Furthermore, she did so at a time when Su Tseng-chang’s (蘇貞昌) more conservative DPP was not taking social activists seriously (at least until last week), a policy that directly influenced the student leadership’s decision to stay away from the party.

There’s no nefarious plot afoot; the mundane reality is that a group of university students has taken on the government and prevailed. This is not good for the vast egos of seasoned politicians. But even more importantly, it is a stark reminder that the current crisis is not a ploy by the opposition for the sake of the coming elections. It is, rather, a symptom of a much larger social malaise and snowballing discontent with a government that has grown ever more distant from the people. (Photos by the author)

* Apparently I wasn’t clear enough: Jiang did not teach Arendt as a student, evidently, but rather her works.
J. Michael Cole 寇謐將 at 9:24 PM
Share