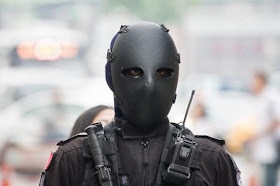 In a worrying development, anti-terrorist units have reportedly been activated to protect the seat of government ahead of a planned protest

Well, maybe it was al-Qaeda after all. News has emerged today, one day ahead of the 330 Sunflower Student Movement protest on Ketagalan Blvd, that a total of 60 elite Night Hawk special forces have been activated at the Presidential Office to ensure security amid times of political uncertainty.

For anyone who’s never heard of them, those are the guys who wear black uniforms, break bricks with their bare knuckles, jump through flames, perform gravity-defying martial arts, rappel down buildings, can shoot a gun blindfolded, and storm buses during hostage situations. Presumably, those are the muscle that would also intervene if the People’s Liberation Army or actual terrorist attempted to do nasty things here.

Let us remember that the thousands of people who have occupied the Legislative Yuan since March 18 to protest a trade agreement with China, and those who escalated matters on March 23 by invading the Executive Yuan, are mostly students. Many of them are not even of voting age. Yes, some of them unfortunately broke a few windows, damaged a few computers, unhinged a few doors, removed a plaque at the LY and ate someone’s cakes. But those people, however hard the government tries to depict them as “violent,” “extremists,” and members of an al-Qaeda cell, are not a threat to national security. They sing songs, distribute bento boxes, listen to impromptu lectures, sleep on cardboard mattresses outside the legislature, read Orwell and Said, and take lots of photographs.

Okay, you might say, but what about the 120 or so police officers that were reported injured during the occupation of the EY in the night of March 23-24. One hundred and twenty against, again according to government figures, about 50 civilians. Those figures are pretty hard to believe, given that the civilians had no body protection or weapons, whereas police had shields, helmets, body armor (riot police), truncheons, rods, and batons. Oh, but what the government has not revealed is that the majority of the police injured (there are hospital records to prove it) had suffered nothing more serious than wrung wrists, sprained muscles in their backs, or symptoms of tennis elbow (which perhaps means a lot of, uh, “swinging action”). In one instance, a female police officer was reportedly “attacked” by student protesters — with a towel. Yes, a terroristic towel, of all things! Hell yes, we need S.W.A.T. units to counter those! Meanwhile, of the about 50 protesters who required treatment, some had concussions, broken bones, split heads.

One question that’s doing the rounds now is whether the Night Hawks (those guys usually come with guns) have rubber bullets. The Ma Ying-jeou administration has already said that it gives the protesters until midnight after Sunday’s protest to clear the area near the Presidential Office, which has turned into a kind of unsightly bunker in recent weeks. Or else, we might find out the answer to that question. (The organizers of the protest have called on all participants to be peaceful and to not provoke law-enforcement authorities.)

It’s unclear whether special forces would intervene and use force against unarmed protesters (presumably they would only take action of people managed to slip through the barricades and stormed the Presidential Office). Aside from the resulting injuries to those who are met with such force, the main loser would be the Ma government, whose image internationally would suffer a terrible blow. Their mere deployment tomorrow already reflects poorly on the administration.

Let us pray that clear heads prevail in government. S.W.A.T. teams are unnecessary. Let them keep honing their skills to meet the real threats to this nation’s way of life.
J. Michael Cole 寇謐將 at 10:52 PM
Share