A feast of hatred (updated with video links + 中文 links) 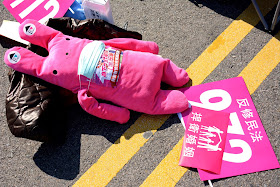 Once again, opponents of same-sex marriage demonstrated that bigotry and intolerance, lies and hatred, are the foundations of their beliefs

After several weeks of buildup, the groups who oppose same sex-marriage in Taiwan descended by the busload on Taipei today for a large protest as the government mulls legal revisions that would make same-sex unions possible. Based on the language that had been used to date, I expected bigotry — and they certainly delivered. In fact, in terms of the magnitude of their intolerance, they showed their true colors.

According to the organizers, as many as 350,000 people (though probably less) turned up for the event, which was intended as a means to pressure the legislature not to amend Article 972 of the Civil Code, which would open the door to same-sex marriage. Pink was the color theme for the event. There was a variety of placards, many reading “Made in Mommy and Daddy” or “All Kids Need Daddy and Mommy,” among others (I have one dad and three moms, and they all love me; how about that, lady?). Apparently the organizers failed to realize that pink was the very color used by the Nazis — the infamous “pink triangle” — to identify homosexuals. (According to the Holocaust Encyclopedia, the Gestapo arrested as many as 100,000 men as homosexuals between 1933 and 1945. About 50,000 men were sent to regular prison, while between 5,000 and 15,000 were interned in concentration camps.) One of the protesters even turned up wearing a complete Nazi uniform. “I don’t care if people don’t like it,” he said. “I will fight back.” To be fair to the Nazis (I can’t believe I’m saying this!), I would say that many of the haters who came out today were more a mix of Nazis and the KKK.

Not all the protesters who participated at the event were Nazis, of course, but a great many of them were Christians. Even though organizers had called upon their followers to avoid showing any sign that would identity them as members of the Church, the choice of songs left little doubt about their affiliations.

Interestingly, in my more than seven years working as a journalist in Taiwan, this was the first time that civilians approached me and told me I was not allowed to take pictures. The site of the protest on Ketagalan Boulevard, they told us as we approached, was a “closed area.” Only after I insisted that I was a journalist, and Ketty told them she was an academic here to study social movements in Taiwan, were we allowed to enter the site. All “security” staff wore special red armbands. There were several hundreds of them, and they kept close tabs on whoever walked around, in a manner that was reminiscent of, but that surpassed in its aggressiveness, the staff of Citizen 1985 who got on my nerves when I tried to cover their protests. Sometimes they would ask people who approached whether they were “for” or “against” same-sex marriage. Those who answered that they were for were barred access. So much for dialogue...

This was also one of the rare times when civilians arrogated upon themselves rights and duties that are normally the remit of law-enforcement officers. Groups of protesters repeatedly locked arms, encircled, and blocked people who carried placards supporting gay marriage (see videos here and here and here). Not even the betel nut-chewing thugs hired by the German wind power firm InfraVest to protest their sites in Yuanli, Miaoli County, were this bad. On many occasions, they also prevented me from walking around freely and left me little choice but to collide with them. More than once I asked what right they had to prevent people from moving freely in a public space. I never received an answer.

As the anti-same-sex marriage group formed a tightening circle around members of the United Church (which tolerates homosexuality), a woman berated Ketty for speaking English. “We’re in China, and we speak Chinese here,” she said. Needless to say, if the discriminatory and utterly unnecessary remarks against language weren’t sufficient to anger Ketty, the reference to China did the trick.

At one point, two men locked arms around a young man who had fallen to the ground while they were pursuing him. I got on my knees next to him and snapped pictures, as several dozens of protesters with their pink placards and banners looked on. They nearly suffocated the poor thing, so closely were they holding him. I looked up and saw a group of Southeast Asian women praying out loud, their arms extended towards the young man. I went over and asked them what they were doing. “We are praying,” one of them said. This much I could tell. “Are you praying so that you will heal him?” I asked, echoing a belief, held by many religious people, that somehow homosexuality is a disease that can be healed. “Why are you asking?” one of them replied with palpable contempt. I told them I was a journalist and that I was curious as to why they were extending their arms in his direction while praying. “We’re just praying,” she said, whereupon they made it clear that his questions — his presence, in fact — were unwelcome. I had my answer: they were indeed trying to “heal” him.

For people who claim to know about love, the mobilization today was one of pure hatred and discrimination. Group dynamics were evidently at play and confirmed what I have long suspected, that a large number of those who turn to religion do so out of a need to follow, to be told how to think. Many of them are perfectly suited to meet the needs of the authoritarian Church and follow it like sheep, even if this leads them down the road of bigotry. Individually they are cowards, but as a group, they impose their beliefs on others in a way that contradicts what the Book tells them. Challenged with fact, they quickly run out of ideas and run away.

For example, ask them to explain how allowing same-sex marriage would lead to bestiality, or how preventing gay unions would eventually solve the problem (homosexuals would disappear over time), and they don’t have a clue how to respond. They’ll have that inevitable smug look on their face, and they will condescend, tell you that they are enlightened by their religion, et cetera. But in the end, their minds are hollow. (The repeated references to bestiality are especially worrying, as this points to a process of dehumanization, whereby the “other” isn’t exactly human and is therefore fair game for all kinds of discriminations. Somehow if one’s partner is of the same sex, he or she is less than human; once we allow that, the next step is presumably having intercourse with animals.)

Oh, and there was xenophobia, too. A huge sign blamed homosexuality on foreigners.

Many of the protesters were children and hired helps who obviously didn’t have a clue about the issue. Some children were doing their homework on the ground. One mother firmly held up the arm of her little girl, who obviously didn’t want to be there, for half an hour so that the homosexuals and their supporters who faced them could see the pink placard she was holding. Organizers wanted a large turnout, and they got one. Still, numbers alone don’t mean much unless they are put in a context. There were far, far more people today who expressed their opposition to same-sex marriage, but in the end, they remain the minority. Taiwan, a predominantly Buddhist country, has about 500,000 Christians. Even if every single one of them opposed same-sex marriage and showed up at the protest (not all religious persons are homophobic, but most homophobes happen to be religious), they would still only constitute 1/46th of the total population of about 23 million. That a relatively much smaller number of people turned up to support gay marriage, or didn’t show up altogether, is a sign that for them, this is a non issue and none of their business. We should also add that the LGBT Pride parade held last month, which attracted approximately 65,000 people, had already advocated for the marriage rights of same-sex couples.

Still, as the several thousands of people poured onto the scene, I could not help but try to imagine what it must feel like to be one of the small number of courageous homosexuals who were holding their placards a few meters away, near the Ministry of Foreign Affairs. I would be devastated at the idea that so many people would come out, with hatred in their hearts, to deny my very existence, to resent me for something I was born with. No wonder some of them shed tears.

As I mingled with the crowd, I thought about all the other protests I had been to in the past 18 months, all the suffering that I had experienced. Where were those people — people with supposed religious ideals, a conscience, love, compassion — when the government was demolishing the homes of vulnerable individuals? When people who had lost all hope were ending their lives? None of them were familiar faces (the only familiar faces today were on the side of the angels).

There are so many problems in society, so much injustice that need remedying. And yet, the only cause that prompted those people to mobilize today was one that seeks to deny other people the right to form a family.

UPDATE: Lawyers have gotten involved, and the victims are planning to file civil lawsuits for slander, false imprisonment, and infringement on personal freedom. They are also considering criminal charges. (All photos by the author)